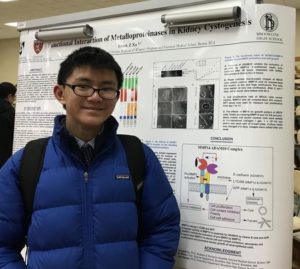 Last month, senior Frank Xu from Brookline High School participated in the final round of the Regeneron Science Talent Search competition, where he was one of 40 finalists. The Regeneron Science Talent Search is one of the nation’s most prestigious science fair competitions, and each March, 40 finalists are selected to present their findings at Washington D.C. For Frank, a recent 2018 MSEF award winner, the news of his finalist status was surprising and exciting.

Frank grew up in the greater Boston area, but his parents emigrated here from China 20 years ago. He grew up with a family interested in STEM: his mom previously conducting research, his dad being a physician’s assistant, and his sister studying molecular biology. Despite growing up in a STEM influenced family, Frank says he found his passion for science on a whim. In his freshman year of high school, he joined the FIRST Robotics team at his school and has been on the team ever since. Similarly, his interest was further sparked by his classes in high school, particularly AP Chemistry. Outside of STEM-related activities, Frank is also on his school’s varsity cross country team and varsity swimming team.

The 2019 Regeneron Science Talent Search and 2018 MSEF fair have been Frank’s first and only science fairs. Frank says that while he hasn’t seen much opportunity for STEM exploration outside of his classes, after a few Google searches looking for opportunities, Frank decided to participate in the fairs using research he was already conducting.

Beginning in his sophomore year, Frank has been conducting research with Dr. Tzong-Shi Lu, an instructor and researcher at Harvard Medical School, who he met at a fundraising event. Previously, Frank had been volunteering at a local hospital, and interacted with patients who were diagnosed with PKD, or polycystic kidney disease. This inspired him to become more involved in the research regarding this disease, and after meeting Dr. Lu, he was able to continue research at Harvard.

Years of hard work led to Frank’s recent project, A unique metalloproteinase complex: ADAM10-MMP14. Frank discovered that these two proteins are involved in the development of PKD, and inhibiting these proteins will stop cystic growth patterns from developing. In addition, Frank found that this protein complex is involved in other diseases such as Alzheimer’s. His research has large implications for possible treatments for a variety of diseases and disorders.

Frank notes that one of the hardest things about research in general was the lack of a set procedure; compared to school, where there is a set of instructions, a lot of research involves figuring out those instructions on your own, and testing many things to get the right result. For example, the gel that Frank used to grow cells in took 2 months to make. Given the specific and unique nature of the cells, Frank had to make a correct “cocktail” of gels in order to get a gel that would promote growth while also supporting the cells.

After working on this project for over a year, Frank competed first in the southeast regional science fair at Bridgewater State University to qualify for MSEF. Being his first science fair, Frank admits the process was a bit stressful, and having judges come and ask questions was not something he was used to. However, being confident and passionate about his work led him to success. He advanced to MSEF, where he notes he was much less stressed because he knew what to expect and had experience presenting. Regeneron STS was a different experience. While this event was over a few days, Frank was able to spend a lot of time with peers. He says that there was definitely a social emphasis on getting to know all of the other finalists.

One thing that Frank thinks made his project and presentation successful was his passion and his approach. He says that the most important thing is to not only be confident in your project, but to have genuine interest in the purpose. For Frank, this meant that he looked forward to questions, and did not fear them, because he wanted to share his discovery.

While the competition may be over, Frank’s research is not. The next steps for his research involve using mouse models to have concrete data to see what effect the protein inhibitors will have on PKD. He also hopes to continue research after high school because he likes the idea of contributing to a growing body of knowledge.

Looking back on his experience, Frank notes that it feels surreal that he was selected to be a finalist. Through his hard work and passion for helping people, it is no surprise that he conducted fantastic research. On behalf of MSEF, congratulations Frank! We look forward to seeing what you do in the future.