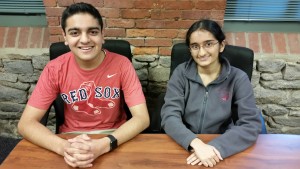 SANTA CLARA, Calif. and WASHINGTON, D.C., Jan. 20, 2016 – Intel Corporation and the Society for Science & the Public today recognized 40 U.S. high school seniors as finalists in the Intel Science Talent Search (STS), the nation’s oldest and most prestigious pre-college science and math competition. The Intel STS encourages students to tackle challenging scientific questions and create technologies and solutions that will positively impact people’s lives. For a list of this year’s finalists, visit https://student.societyforscience.org/intel-sts.

Yashaswini Makaram and Amol Punjabi of Northborough, both seniors at the Mass Academy of Math and Science at WPI in Worcester, have been named finalists. They are the only two students selected as representatives of Massachusetts to continue in the competition. Yashaswini’s project is titled “The Phoney Lift: Using Accelerometers to Identify People”. Amol’s project is titled “ViaPocket: A New High-Accuracy Druggability Predictor and Its Application to Intrinsically Disordered Proteins”. Both will present their research in Washington during the competition.

Mass Academy Director Michael Barney comments,” We are extremely proud of Yasha and Amol for the work they have done, and will continue to do. They are outstanding role models and tremendous students, who will make a difference in the world”.

The 40 finalists receive an all-expenses-paid trip to Washington, D.C. from March 10-16 to compete for more than $1 million in awards provided by the Intel Foundation, including three first-place Medal of Distinction awards of $150,000 each that will be presented to students who show exceptional scientific potential in three areas: basic research, global good and innovation. Additionally, three second-place awards of $75,000, and three third-place awards of $35,000 will be presented. Finalists receive at least $7,500 for being selected as part of this prestigious group.

“Finalists of the Intel Science Talent Search are the innovators of the future,” said Maya Ajmera, the president and CEO of Society for Science & the Public, publisher of Science News and alumna of the Science Talent Search. “Their research projects range from highly theoretical basic research to innovative practical applications aimed at solving the most vexing problems. But it’s not just their research that makes them stand out – finalists are also selected based on their leadership capacity and initiative. We congratulate these talented students and look forward to learning more about their research and aspirations as we celebrate the 75th anniversary of the Science Talent Search this March.”

“Congratulations to the Intel Science Talent Search finalists who will be participating in the competition’s 75th anniversary event this March,” said Rosalind Hudnell, vice president in Human Resources and director of Corporate Affairs at Intel Corporation, and president of the Intel Foundation. “Intel has a strong legacy of supporting and nurturing America’s brightest young minds, and we look forward to the competition in March and to sharing their creativity with the world.”

While in Washington, D.C., Intel STS finalists will undergo a rigorous judging process, interact with leading scientists, display their research to the public at the National Geographic Society and meet with national leaders. Winners will be announced at a black-tie, invitation-only gala awards ceremony at the National Building Museum on March 15, where Dr. Neil deGrasse Tyson, astrophysicist and Frederick P. Rose Director of the Hayden Planetarium, will serve as the keynote speaker.

In the past, young innovators chosen to participate in the STS have gone on to receive more than 100 of the world’s most prestigious honors including 12 Nobel Prizes, two Fields Medals, 11 National Medals of Science, 18 MacArthur Foundation Fellowships and even an Academy Award for Best Actress.

In celebration of the 75th anniversary, the Society is inviting many former Science Talent Search alumni to attend the gala, as well as an alumni conference that will feature panel discussions and prominent alumni speakers.

Intel (NASDAQ: INTC) is a world leader in computing innovation. The company designs and builds the essential technologies that serve as the foundation for the world’s computing devices. As a leader in corporate responsibility and sustainability, Intel also manufactures the world’s first commercially available “conflict-free” microprocessors. Additional information about Intel is available at newsroom.intel.com and blogs.intel.com, and about Intel’s conflict-free efforts at conflictfree.intel.com.

Society for Science & the Public (SSP), the nonprofit organization dedicated to public engagement in scientific research and education, has owned and administered the Science Talent Search since its inception in 1942. To learn more about Society for Science & the Public, visit www.societyforscience.org, and follow the organization on Facebook and Twitter.

Mass Academy of Math and Science