If you take a look at the Boston Globe in the early 1960’s, you would find advertisements encouraging you to come to the state science fair, then jointly hosted by the Globe and MIT. In fact, in 1960 the state fair was only in its 11th year, awarding 143 students. Projects ranged from measuring surface tension on wires to studying the effects of an overdose of vitamin A. The fair was already giving out scholarships to award winners, and even then included some special awards. One experiential award today, the National Youth Science Camp, is similar to the special ocean cruise with the Woods Hole Oceanographic Institution offered to 4 students in 1960. 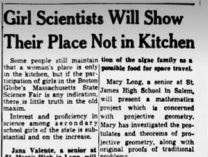 The next year, the same advertisements and articles about the state winners can be found, with an increase in articles about women in the science fair. Newspapers highlighted the rise in participation, and the success of female students. A state science fair winner from Woburn was awarded a full tuition (then worth $6000) scholarship to Brandeis. More detail the interesting projects by women that won, such as studying atomic properties, acidity in soft drinks, and projective geometry. Already in 1961, one student investigated algae as a possible food to be used in space travel. That same year was the first time a human traveled in to space! Today, scientists are still researching what foods can be sustainable in space, but now for the purpose of putting humans on Mars.

In 1962, the Boston Globe said that at least half of the students in the state fair were female. Around 175 schools participated in the fair that year, with winning projects studying germ exposure and the relationship between high cholesterol and heart disease using guinea pigs. In the later years, female winners are highlighted for their projects and hard work. Some win multiple years in a row or participate in different fairs.

In 1969 around the time of the 20th fair, Anna Holman passed away. Anna had been an organizer and advocate for the fair for almost its entire 20 years. As a Harvard graduate who studied education, she was passionate about teaching students science and letting them explore their interest in a science fair project. 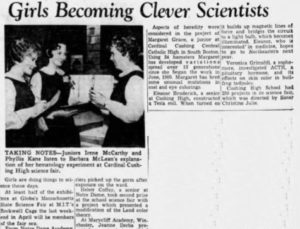 Many of the ideas behind these projects researched in the 1960’s are still being studied today, from space friendly food to causes of heart disease, and it is students like the women who participated in the fairs 50 years ago and encouraging organizers like Anna who helped lead the way with their curiosity. The effects of vitamin A overdose can be found with a quick internet search today thanks to the hard work of young scientists.

The future of science only seems brighter as more students feel empowered through research and engineering practices. Today, the students participating in the Massachusetts Science and Engineering fair program are over 50% women, and we hope to continue encouraging students from all backgrounds to continue their curiosity in science.